Borrowed Ground was spearheaded by Ben Kerrick for his Master’s thesis in Environmental Science with a specialization in Agroecosystem Science. Leveraging his dual degree in City & Regional Planning in OSU’s Knowlton School of Architecture, his background in matching artists with temporary use of vacant space in New York City, and local food systems knowledge, Ben’s work investigates the potential contribution of public and private vacant space to food production and garden access in cities. 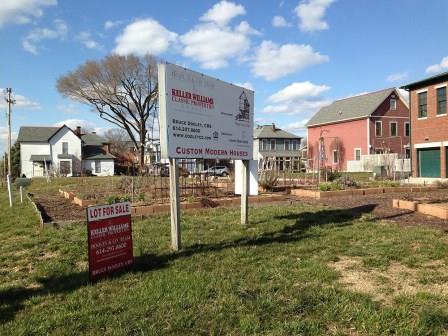 Thesis Abstract
Urban growth in the 20th and 21st centuries has had, and will continue to have, two direct effects on urban food systems: greater urban populations require more food, and expanding urban footprints diminish agricultural production areas around cities. Increasing globalization, consolidation, and industrialization of the food supply have been concurrent with this urban growth, leading to a profound physical and psychological distance between urban dwellers and the sources of their food. As concerns about climate change, sustainability, and food insecurity have come to the forefront of conversations about our food system, scholars, practitioners, and policymakers have explored the extent to which cities might feed themselves. Urban agriculture can expand food access in cities, engage urban dwellers in food production, and provide a beneficial use for unused urban lots. Idle or vacant land, both publicly and privately owned, represents an important resource for urban gardeners and farmers, and potentially for their rural counterparts as well. Applying the concept of usufruct, or productively using another’s unused land, could increase agricultural use of both privately and publicly owned land resources. However, little is understood about how these land resources vary according to degree of urbanization, or the degree to which they might provide land access and food relative to the needs of the local population.

This research aims to gain a better understanding of how vacant land resources vary according to ownership and urbanization, and to evaluate usufruct’s potential provision of vegetables and land with respect to the local population. Over one hundred “walking distance”-defined study sites (300-meter radius) were randomly selected in seven central Ohio counties comprising and surrounding the city of Columbus; these study sites represented four urban categories referred to as Rural, Suburban, Urban Employment and Urban Residential. Within each study site, GIS-based classification was used to identify publicly and privately owned vacant land that is suitable for vegetable production, based on soil quality, slope, water access, and solar exposure. These vacant land resources were compared among urban categories and between public and private ownership. Production scenarios were modeled, and the estimated vegetable yields were measured against the dietary needs of the study site populations. Available land area was also related to the number of study site households. These results were compared among urban categories.

No appreciable differences were found between publicly and privately owned land in terms of parcel size, perimeter-area ratio, or quality; however, privately owned land was more prevalent, and when present, was likely to occur in greater quantities. Idle vacant land is rarest in the least urban settings, where it is likely to already be in production, and most prevalent in low- or mid-density urban contexts, whereas parcel size was found to decrease as urbanization increased. The proportion of vegetable serving needs that could be met decreased from less urban to more urban contexts, as did the land-to-household ratio. However, when compared with other studies documenting the ratio of production area to household, maximizing production in less urban areas may be limited by lack of demand from the local population.

The findings of this research demonstrate that privately owned land is a significantly more prevalent land resource for urban food production than public land, suggesting that policy instruments which facilitate or incentivize usufruct agreements between private owners and urban farmers would be effective in increasing urban agriculture. The land suitability index used in this research shows that soil quality is the most significant obstacle to enabling food production in more urban areas. Finally, this research demonstrates that land-to-household ratios vary significantly according to urbanization, and that this ratio should be considered when assessing the production potential of urban land.[/expand]