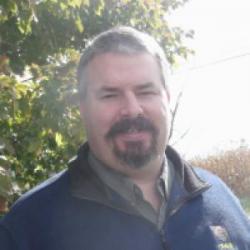 Kevin Armstrong graduated from Cedarville University in 1998 with a bachelor's degree in History/Political Science. His career in Geographic Information Systems (GIS) began in 2003 when he was hired by TechniGraphics Inc. in Wooster, OH where he learned about GIS, database administration, data conversion, and website development. Kevin started work with AMP as the GIS Application Developer in September 2013. During his time at AMP he has worked on the Local Food Systems website and acoustical monitoring on Mellinger Farm in addition to creating maps and web apps that support AMP's mission. He lives and works on his family's 200-year old farm with his wife and 5 children.